Ritual as sport. A vision as agritourism. A miracle as local history. The greatest discovery of the production is that in order to gain access to new worlds, in order to perceive miracles behind banality, in order to discover the uncharted territories in us and around us, in order to notice the concealed parallel spaces, we do not need to escape the slavery of facts, to free ourselves from everything material, to reach calm, serenity and silence, but, to the contrary, we need determination, movement, curiosity, liveliness, adventurousness, restlessness, zeal and enthusiasm.

Not to shake off and surrender, but to open up and attack. Not to wait, but to want. Not without us, but with us. Not to be carried away, but to decide. Not to empty oneself, but to be filled. Not to stop, but to go on a journey. In order for this to happen, we need to regain control our sense organs and make them organs of sensuousness. We need to see anew, feel anew, decipher and name anew. To leave the comfortable zone of the familiar and to understand that the unfamiliar is only that which we have forgotten, which we have come to resent, simply because man prefers to be a lazy, vegetative being rather than the hero of everyday creation. Not to be afraid of the unbridled order that we do not understand. Not to be afraid of free celebrations of entropy.

Each of the four parts of this performance begins by enacting the basic rhythm of existence: for Debris, it is the metronome, for Daubnerová, it is the heartbeat, for Potôň, the footsteps, for Honey and Dust, the rhythm of breathing. From the cold and abstract to the cold and humane, warmth consists in surmounting the way and oneself and others. Mechanicalness is a protective net.

At first, Debris offers a leap off of the macrocosm, in the end, Honey and Dust chart a return to the microcosm. In between, Daubnerová leads us to the stadium and Potôň to the temple. Both places are synonymous with theatre. And theatre is a metaphor for permanent individual creation. Original sin or infinite triumph? Not to forget the possibility of a journey beyond physical limits. And the attempt to articulate it. To find a language. To loose innocence. Any number of times. In every production, a moment of interruption occurs, in every episode, the actors fall to the ground and rise from the dead, in every scene, a relic of the invisible side of existence is present. Debris framed the project with the two elements of water and air, Honey and Dust with earth and fire. Between these are human structures: the playground and the church. For Debris, human perception always means upsetting perfection, aesthetics is more important than emotions, what is far, what is absolutely remote draws nearer. A choreography of particles, a weeping of components. Elementariness as a beautiful mistake. For Honey and Dust, to the contrary, existence is so close that individual forms are difficult to tell apart. Everything is a torso and a fragment. Space is the parallel presence of planes; space-time is the absurd investigation of the anticipated. Man is only what he investigates. Exploration is the meaning of life. But meaning is what is created in its disappearance. Naming is the merciless description of uncertainty. To identify is an archaeology of self-deception. For Daubnerová, being is a succession of sport disciplines, it is ruled by physicality, the force of the body, which wants to both aid and curb the mind in calling up ephemeral images of the past, present and future that are always only alter- natives to the apparent present. In this world, man identifies with his deeds. Tradition is the reflection of familial, private mythologies. That is why bodily exhaustion is the soul’s salvation. For Potôň, the spirit is a garment that can be taken off and put on, collective consciousness is the face, the church is the brain, Jesus is the unacknowledged and disturbing alter ego of each one of us. Daubnerová understands being as exhibition, as interpretation, Potôň as a hiding game, as an eternal skinning. Communication is an inarticulate apprehension of everything at the same time.
Miklós Forgács

“Potôň Theatre approached three theatre companies whose distinctive authorial signature has been jointly responsible for the best productions on our independent scene. Debris Company, Honey and Dust, Sláva Daubnerová and Potôň Theatre created a multi-genre piece on the topic of miracles.”
Gregi.net, 20. 4. 2017

Iveta Ditte Jurčová (1968) has worked as a director with several Slovak and Czech theatres. She is the author of an array of educational projects in the field of scenic art, in which she participates as a lecturer. She has led theatre workshops for the Association Divadelná Nitra, the National Cultural Centre, Potôň Theatre and others. In 2015, she curated the Slovak section of the main programme of the IF Divadelná Nitra together with Michal Ditte. 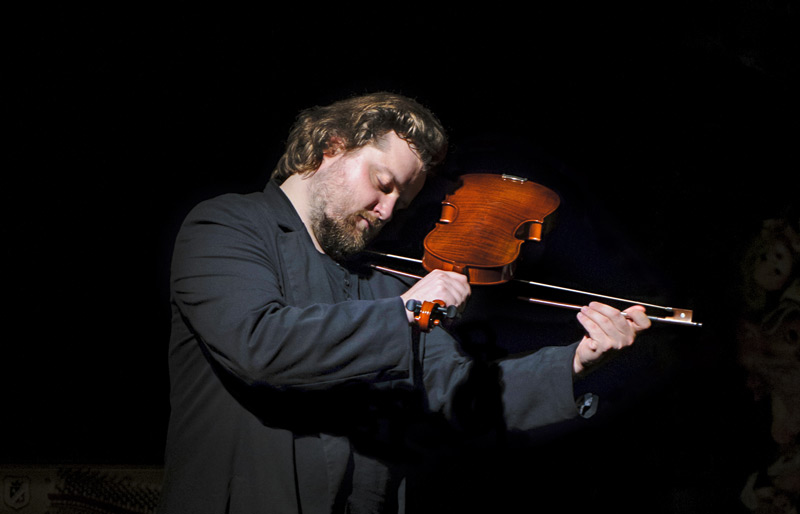 Andrej Kalinka (1978), a composer, librettist and director. He earned the DOSKY 2016 award for the category Best Scenic Music for his musical accompaniment to the play Miracles for Alice (Karol Spišák Old Theatre in Nitra). He is a founder of a free artists’ collective by the name of Honey and Dust; he appeared at the IF Divadelná Nitra in 2015 with the production Home Eros Faith.

video of the production: yes