Spanish playwright Federico García Lorca’s classic play The House of Bernarda Alba has a unique position in the history of Nitra’s theatre. In 1979 its production was not only one of the most artistically distinctive accomplishments by director Jozef Bednárik and his definitive act of recognition on the professional theatre scene. Even more so, it was a report about a territory closed in by a fence, guarded by soldiers wielding machine guns and surrounded by a mine field. The territory of unfreedom and moral relativism. It makes little difference if you associate this portrayal with Franco’s Spain or Nazi concentration camps – the main point of reference for set designer František Perger – or even Normalisation-era Czechoslovakia, read in by then audiences and critics.

The Andrej Bagar Theatre has decided to revisit the text in its jubilee season, albeit in slightly altered form. Lorca’s play served as the basis for a self-standing script by Czech playwright Anna Saavedra. What is the ethos of that same territory more than four decades later? According to director Marián Amsler, it resembles a civil war that has not quite grown into full-fledged bloodshed, but the polarisation of contemporary society evokes as state in which the individual camps are impatiently waiting for an excuse to pounce and ventilate their hate with abandon. The House can be read as Lorca’s premortem hallucination. The Spanish playwright, portrayed by Peter Oszlík, whom we see encountering the men who will prove fateful, symbolically arranges his play’s cast in detail and even introduces the corpse of Bernarda’s husband. The story of The House is Lorca’s testimony about the rise of fascism in Spain and especially Amsler’s testimony about a segment of Slovak society spurred by even the slightest deviation from all conforming to the idea of ‘normal’. The play’s rehearsals overlapped with the 2020 parliamentary elections campaign, which had Slovakia anticipate the end of an era rampant with vilest corruption practices. But the country also feared the price to pay would be a strengthening of the position of right-wing extremism. It might be a certain report about the state of the country in itself that we thought it a victory when the parliamentary representation of fascist party members ‘only’ grew by three percent, or that the ministry of labour, social affairs and family is in the hands of a person who formerly espoused the moniker ‘Last Crusader’, and so on. The tone of the production, however, was also inflected by the date of its premiere (6 March 2020) in another way. This was the date Slovakia saw its first confirmed case of COVID-19. The following week, a ban on all public cultural and other large events came into force and theatres remained shut, and we were all confronted with the question of limits between socially responsible behaviour and protection of vulnerable groups on the one hand, and protection of basic human rights and freedoms on the other. To see María Josefa (Žofia Martišová) tyrannised and imprisoned on stage by Bernarda (Daniela Kuffelová) is to recall the time when elderly citizens were only allowed to do their shopping during two hours before noon. While at that, the state completely disregarded the number of working seniors, or the fact that there are many localities in Slovakia where people under 65 are practically non-existent.

The House is also about director Marián Amsler’s ability to work with actors, to guide them skilfully and mine the most out of them. The result is that the Andrej Bagar Theatre actors’ crew have rehearsed one of the finest collective performances in the recent years. It is disciplined and precise in respecting the director’s ambition to forge a claustrophobic world, underlined by the narrow performing space, all the while handling the individual characters plastically and building a homogenous whole that does not consist of nine distinct individuals but nine colleagues working in tandem.

For its connection with the anniversary of the Andrej Bagar Theatre, ITF Divadelná Nitra has decided to feature this production in the main programme, outside the curatorial selection of Slovak theatre. By featuring the production, the organisers are also commemorating one hundred years of Slovak professional theatre. 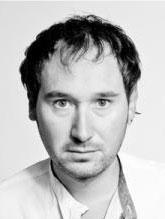 Marián Amsler (1979)
graduated in dramaturgy from the Theatre Faculty of the Academy of Performing Arts in Bratislava. His student productions of Chekhov’s Platonov and Ivanov already garnered awards at theatre festivals in Warsaw, Prague and Brno, and both earned him the Dosky Award for Discovery of the Season. Upon completing his studies, he has collaborated with numerous Slovak and Czech theatres. In 2005 he co-founded the international Theatre Letí in Prague. From 2008 he was in-house director at HaDivadlo in Brno, and served as its artistic director in 2010 – 2014. In 2015 – 2018 he was director and artistic director at Theatre ASTORKA Korzo ’90 in Bratislava. Amsler also lectures at the Directing and Dramaturgy Department of the Theatre Faculty in Bratislava. As prominent figure on the Slovak theatre scene, his directorial works have been featured several times at Divadelná Nitra: 2002 – Táňa, Táňa (VŠMU), 2003 – Platonov (VŠMU), 2012 – Pagans (Slovak National Theatre), 2018 – People, Places and Things (Andrej Bagar Theatre in Nitra). In 2012 he was Divadelná Nitra’s curator of the Slovak programme section.