He, colonel Józef Schiller, once an unusually active official of the Cracow secret police SB (Służba Bezpieczeństwa Ministerstwa Spraw Wewnętrznych – Security Service of the Ministry of the Interior), who had been working on cases of Catholic intelligentsia in the area of Lesser Poland. She, Ada Grudziński, a French Jew of Polish origin, daughter of the Polish dissident Mieczyslaw Grudziński, who had defected to France after the declaration of the 1981 martial law. Two genuine characters, who had never met in real life and most probably did not even know about each other, are now meeting in the fictitious world of the theatre production, while Ada – an actress – plays herself.

He is living in memories that have nothing in common with his present life. She is a modern girl who is not aware of her own past and, therefore, does not know what to expect of the future. He and she create a common space for stories, a space in which two very different worlds merge into one. Their encounter is something between an interrogation, an uneven struggle between the executioner and the victim, on the one hand, and a romance of fresh lovers, on the other one. The fiction and the reality are mixed in the production, similarly as it was in the archives of the secret police (SB) where reality was mixed with fabrications. Stories anchored in reality sometimes give way to fantasy, or a vision of reality that is closer to the expectations of the heroes on the stage. Similarly Ada Grudziński’s memories and replies shift between reality and fiction – memories of an actress who in the character of Ada plays “herself“, oscillates between her own memories and fiction and with her acting makes the border between the real and the artificially created, between re-launching and creation of the past in the present rather vague.

Colonel Józef Schiller had made a stunning career in the structures of the Lesser Poland SB. He excelled in the methods of psychological torture and nurtured the cult of his own personality in the ranks of his subordinates and secret collaborators. One by one, he penetrated into their lives, became part of them, turning into someone who is more than an employer, more than a friend. Although he had been very active, in the new Poland his social position was never the same as in the past. How can this man, who is getting old and losing physical and mental strength, live in a way that he still feels needed and important? Can he, through recounting his past experiences, come to an understanding of their value roots and comprehend what has changed around him and why he cannot function in the new social system as he used to? Or, is he trying to come to terms with the betrayal of the society and the betrayal of his own body (a handicap due to which he is ridden to a wheelchair) by escaping into his memories? He needs to browse on his past. Loudly and in someone’s presence, because the meaning of a story lies in the fact that it is recounted. She becomes a part of his story – sometimes as one of the characters he had once met, another time as a listener. In their production Radek Rychcik and Tomasz Kireńczuk are trying to grasp the essence of Józef Schiller’s phenomenon, why he was such a perfect manipulator. Follow Me is a play of seduction with the participation of actors, characters and viewers. The stories and the roles are interchanged in order to ask questions about the overlap of the past into the present, about the existence of the physical and the spiritual, idea and matter, about stories, ideologies, myths, memories and everything past which enables us to comprehend the future.
Ján Šimko

The origin of the production was initiated by the Divadelná Nitra Association within the project Parallel Lives – 20th Century through the Eyes of the Secret Police. 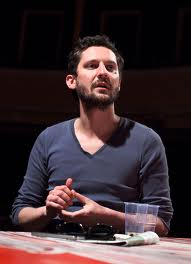 Radek Rychcik (1981) studied at Warsaw University and the State Higher Drama School in Cracow. He belongs to the youngest generation of artists who are participating in the contemporary theatre discourse in Poland. He started his career as an assistant of the renowned director Krystian Lupa at the production Factory 2, later staged several theatre pieces in a number of Polish theatres. He markedly attracted attention with the production of In the Solitude of Cotton Fields by Bernard-Marie Koltès which was performed at many festivals all over the world (REDCAT in Los Angeles, On the Boards in Seattle, Under the Radar in New York, PuSH Festival in Vancouver, Santiago a Mil Festival in Chile, PAMS in Soule and elsewhere). For the production Łysek of Ida Board (2010) he received the most prestigious Polish award for direction the “Laur Konrada”, for his Hamlet (2011) he got the Grand Prix of the 14th Shakespeare’s Festival in Gdansk

Tomasz Kireńczuk (1983) obtained his MA degree in theatrology at Jagiellonian University and the degree of Doctor of Philosophy at the Institute for European Studies at Jagiellonian University. He is active as a dramaturgist, theatre critic and curator of art projects. With a group of friends, he founded the New Theatre in Cracow in 2006 which, thanks to its clear socially committed profi, is, at present, one of the most interesting Cracow stages. As a dramaturgist he cooperated with theatres in Cracow, Wroclaw and Kielce, where he rehearsed productions on the motifs of Ibsen, Witkacy and Jerofejev.

AIf you are interested in these materials, write to archivy@nitrafest.sk