The death of the secretly ordained priest Rev. Ing. Přemysl Coufal is one of the most serious unclarified cases of the Slovak judiciary. It has many levels: it combines a personal tragedy, struggle for human honesty and purgation of one’s name and it is also an example of unprecedented practices by the Czechoslovak ŠtB. It also demonstrates the failure of the judiciary system of the past regime as well as that following 1989. Last but not least, it demonstrates the power the former top members of the secret police have had in Slovakia until today.

The ŠtB interfered into Přemysl Coufal’s life several times. In the 1960’s, having obtained the information about his activities in the underground church, it managed to win him over for its services for several years to provide information about the economic illegal practices of his company. Later he used numerous foreign business trips for establishing contacts and exchange of information and material with the exile and foreign church representatives. In 1979 he was identified as a courier to be forced to collaborate with the ŠtB, which he refused. On 24 February 1981 he was found dead in his flat showing traces of a brutal murder. The case was concluded by the investigation authorities of the day as a suicide. Neither the investigation of 1990, after which the case had been put aside, reached any other conclusion. By the 1992 court decree all the documents related to the case were locked in the archive safe of the SR with the date of release corresponding with the negative prescription (limitation of time beyond which the possible criminal acts related to the case are no longer enforceable). The time limit is still running.

There have been several unsuccessful initiatives to purge the name of Přemysl Coufal, which neither his parents lived to see, especially trying to achieve the annulment of the official investigation conclusion version classifying it as a suicide. In connection with Coufal’s case the disappearance of the journalist Marcel Samuhel is also talked about who had informed about the case in the early 1990’s – at a time when several journalists writing about serious issues disappeared in Slovakia. The personal story of Přemysl Coufal opens many ethical issues – at a time when ethics is considered an empty word and helplessness against non-transparent power mechanisms is cured by cynicism – it is a demonstration of responsibility for the sound functioning of society carried not only by brave individuals but mainly the legislative and judiciary bodies. It also shows how far reaching consequences complicated political decisions can have, such as, for example, “the broad line” after the past which Czechoslovak politicians had done following 1989. On the one hand, it was a gesture of moral noble-mindedness and period-conditioned optimism by the political elite of the day, on the other one, it showed its deadly romanticism and political ignorance the fatal consequences of which we are suffering until today.

In the production The Inside of the Inside the authors, Ľubomír Burgr and Dušan Vicen, are covering several stages of the ŠtB operation. The grotesque analysis of “evaluations” that the members of ŠtB at all levels were writing on themselves offers an opportunity to look into the mechanisms of building up a parallel power structure within the ŠtB thus enabling mutual inspection of individual members of staff and collaborators at all levels of this organisation, mechanisms that might be operational even after the dissolvement of the ŠtB. Another important motif in the production is the story of the ups and downs of prominent party officials, such as Zdeněk Mlynář, author of the thrilling book Frost comes from Kremlin. Thanks to this we can look into the unrestrained inside of power which, unless harnessed by law or morality, can engulf everything around it, including itself, as in the archetypal picture where the devouring starts from the tail. In their production Burgr and Vicen are dealing with stories affected by the ŠtB in recent past but also significant issues which resulted from its activities following the fall of the totalitarian regime. What is of key importance, then, is the investigation of our coming to terms with the heritage of the totalitarian past.
Ján Šimko

The origin of the production was initiated by the Divadelná Nitra Association within the project Parallel Lives – 20th Century through the Eyes of the Secret Police. The Slovak and world premiere was held at the festival.

First Part: Inside of the Inside 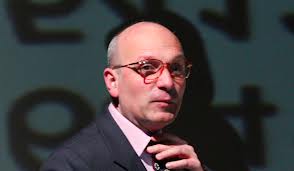 Ľubomír Burgr (1964) studied music composition at the Academy of Performing Arts (VŠMU) in Bratislava. He was a member of the orchestra at the Jonáš Záborský Theatre in Prešov, in 1991 joined the theatre group Stoka, where he was active as a musician, composer and actor. He is a founder and member of several music bands. Together with his colleagues, he founded the Association for Contemporary Opera in 2000 which is connected with the activities of the SkRAT Theatre (established in 2004), where he works as an author, director, actor and composer. In 2003 he founded the A4 – The Association of Contemporary Culture Unions. He composed two chamber operas and authored many music compositions for the theatre and radio plays.

Dušan Vicen (1966) studied at the Teachers‘ College of Matej Bel University in Banská Bystrica and later theatre direction at the Academy of Performing  Arts  (VŠMU)  in  Bratislava. He is the founder of the Ka Theatre in Tvrdošín, was active in the ensemble Once Upon a Time in Oravská Polhora and collaborated with the Trnava Disk Theatre.  At the moment he is a member of the SkRAT Theatre where he works as an author and, simultaneously, director of successful drama productions. One of his latest directions, the production Buggers and Suckers, was presented at the festival Neue Stücke aus Europa in Wiesbaden in 2012. He is a double Alfréd Radok prize-winner for the best Czech and Slovak drama text. He also writes radio plays.

AIf you are interested in these materials, write to archivy@nitrafest.sk