The turn of the millennia is often talked about as a period of memory inflation. The technologies have caused that the volume of preserved material has decupled as compared

to previous decades. In a situation of an absolute outbreak of memories and preserved information, after the fall of totalitarian regimes, an interest increased in the material kept in the archives of repressive branches in the countries of the former Soviet bloc. The information from the archives is more or less accessible, but with its emergence a new problem arises: who will process the material so that it is generally usable, to what extent will such processing be reliable and what it really means to use this material.

The archives of the former Romanian secret police (Securitate) were made accessible by the government long after the fall of the Ceauşescu regime and access to them is still very limited. Some people claim that there is 40 km of documents in them; others quote the figure of 26 km. Recent declassifications, which are very selective, just as the practices of today’s political elite, have turned the secret police and its archives into the main provider of undoubted truths. The main protagonist of the play by Gianina Cărbunariu X milimeters out of Y kilometers is the writer and journalist Dorin Tudoran who left Romania in 1985 after 40 days of hunger strike. His folder in the Securitate archive has approximately ten thousand pages. Tudoran has edited a small section of it and published it in the book Me, their son. The book shows how Securitate and its informers used to make up fictitious stories about the watched people and how they were able to come closer to them by putting pressure on their friends in order to make them cooperate.

Securitate tried to influence Tudoran in a „positive way” and discredit him at the time when he was in exile. The starting point of the production by Gianina Cărbunariu, who contacted

Tudoran and several other watched victims during her work on the production, is the focus on the idea of truth in a world built on self-duplication, self-aliases and self-camouflages. By confronting different truths, the staging of X milimeters out of Y kilometers shows how various speech acts, statements and stories build up reality, how, in the totalitarian regime, truth was degraded to an instrument for power legitimization and how, after the fall of the regime, defining truth has become a profitable business.

Cărbunariu is not interested in creating a reconstruction of reality; she would rather investigate what are the options for the theatre in creating such reconstructions and how we deal with traces of reality. Her works are theatre productions of limited means, reduced to a minimum of formal instruments and with a minimal budget. The strength of this theatre lies in the ability to present topical social issues and encourage the audience to a discussion in a way which is neither black-and-white nor moralising and mentoring but tries to grasp the complicated reality by opening the space to several points of views, while sensitively bringing also those which would not be able to get a word in without someone’s help.
Ján Šimko

“... four actors exchange their roles, sometimes they are the accused ones, other times they are those who accuse, they draw attention to the discrepancies in the author’s statements and their archival records. They play in the audience space, the spectators sit wherever they like in the auditorium and sometimes they find themselves in the middle of an interrogation. The video piece by Romanian artist Ciprian Mureșan, whose exhibitions have been held from Berlin to Sydney, emphasises the idea of constant monitoring by web cameras placed on the table during interrogations. (...) In those times, the lack of solidarity was the norm, and unfortunately, in Romania it is so even today,” says Gianina Cărbunariu.
November 2011, lepoint.fr 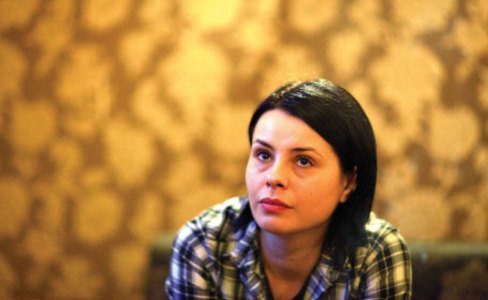 The director and playwright Gianina Cărbunariu (1977) made herself famous at the beginning of this millennium by her plays Stop the Tempo and Kebab, which were staged by many prominent theatre houses in Europe and elsewhere in the world.  In addition to writing, she also works on dramatisation of texts, mainly with her own ensemble. In her later works she deals with documentary topics, related to present social taboos: she made a production on ethnic conflicts between the Romanians and the Hungarians in the 1990’s (20/20), about the „sale“ of the members of the German ethnic group from Romania to western Germany after the Second World War (Sold out), about the controversial circumstances of using potassium cyanide in gold mining in Transylvania (Roșia Montană).

If you are interested in this material, write to archivy@nitrafest.sk