Dmitry Danilov’s dramatic debut A Man from Podolsk was one the biggest theatrical moments of the past year in Russia. After the author earned the Golden Mask for best script, productions of this comedy laced with absurdity began cropping all around Russia, but also in Belarus, the Ukraine and in Germany. In his play, the mature and acclaimed novelist deals with subject matters one already knows from his books – almost documentary‑like, raw observations and descriptions of situations experienced daily by ordinary people in all sorts of one‑horse towns around the country. Having travelled, seen and reported on many of these places, he has acquired a keen ear for all their conversational idiosyncrasies and it is on these that his play is built. Such observations are very important to him. Danilov said that, although directors are fond of referring to it as absurd, the play is above all about our ‘paltry ability to observe’, because we almost never perceive anything interesting or beautiful in the reality that surrounds us. Nikolai, the play’s protagonist, likewise wonders if his situation is absurd or just terrifyingly real. On his regular train ride to Moscow, where this man in his thirties commutes daily from the suburb of Podolsk, he is arrested. He ends up at a police station, without an explanation why. He is sober, his answers are precise, his papers are all in order. The policemen, who carry out all the necessary procedures surrounding an arrest, are also quite clueless as to why Nikolai is there. But they certainly know that Nikolai’s life outside lacks meaning, of which they now undertake to teach him. They interrogate him. Not for some crime or another but for ‘distracting his desire for being’. Their psychological investigation uncovers that he is not very fond of apartment blocks in certain autonomous districts in the south but that he loves Amsterdam. For a while, we expect torture, humiliation, beating. But instead, they give him a gentle, sophisticated but clear explanation that every urban landscape has its charm. They also quiz him with strange questions about his hometown, quote Vladimir Sorokin, John Cage, talk about Structuralists and Kazimir Malevich. They teach him a special ‘brain dance’ and insist that complex diphthongs are the best mental exercise. They listen to Einstürzende Neubauten and can hold conversations about anything that a thirty‑something‑old could nowadays find interesting. They are intimidatingly sophisticated and decent, men – and not only those from Podolsk – could easily forget that they represent state power and procedures, whose exact purpose is only clear to them (even that may not always be so), and who apply their power in practice. The arrest and interrogation here represent an intelligible break, a clearly structured point in the obscure and incomprehensible stream of an ordinary person’s life.

The massively positive reception of this play attests to the fact that the perverse understanding of the role of power described by Danilov simply and aptly portrayed what Russian society experiences in its daily life. It includes allusions to an unclear and unjustified presence of ununiformed men on Krym and many other events whose explanations are difficult to fathom. The production of A Man from Podolsk at the legendary Teatr.doc was the first production of this play and, despite many new interpretations, it remains unsurpassed. The rawness of the documentary approach of the actors as well as director and theatre founder Mikhail Ugarov to the script, and his ability to accent notable socio-critical motifs without disrupting the subtle play of straightforward dialogues, are a perfect fit for Danilov’s script. This simple production stands as one of many testimonies to the power of the legacy of Mikhail Ugarov and his wife Elena Germina, dramaturge and cofounder of Teatr.doc. 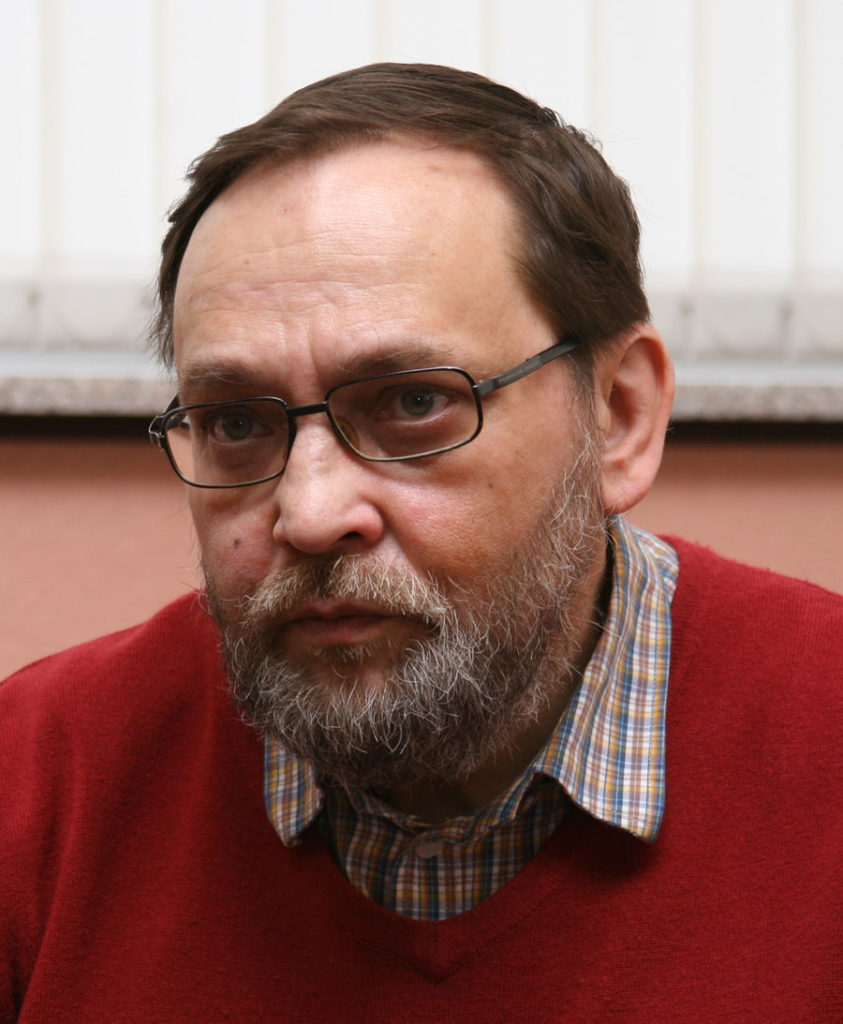 Mikhail Ugarov (1956 − 2018) a playwright, theatre and film director, lecturer, initiator of the Russian ‘New Drama’ movement, the founder and artistic director of Moscow’s Teatr.doc and director of Theatre CDR. He graduated from the A. M. Gorky Literary Institute in Moscow, where he specialized in drama. He authored several plays, the most notable of which include Oblom­off, whose 2003 production earned the main award at the Golden Mask festival in Moscow. Ugarov has directed a number of documentary productions at Teatr.doc, including September.doc (2005) about the Beslan school terrorist attack, Two in Your House (staged at Divadelná Nitra 2012) or Hour Eighteen (2012). He also wrote screenplays for Russian TV series such as The Petrograd Secret (1996), Churchill (2011) and others.

For A Man from Podolsk, the play’s author Dmitry Danilov earned the title Best Playwright at the Golden Mask festival 2018. He dedicated the prize to director Michail Ugarov, who died unexpectedly two weeks before the award ceremony.