A mime, musician and fine artist create diverse situations in space or build one playful scene after another and transform or tear them down with equal verve. The images are difficult to describe, but the playfulness and joy which the three actors approach display in their performance on stage is strangely contagious and lends it a peculiar, ritual quality and, above all, brings the rapture of free creation. Personal or collective ritual – be it perceived and performed in all seriousness or not – has found use in art as a personal defence mechanism against or a critique of the vacuity of the current world more frequently since the late 19th century. This period saw a massive expansion in the possibilities of travel to faraway countries and a rise in the number of encounters with the rituals of unfamiliar civilisations. At the same time, this was also when nationally, regionally or linguistically ‑oriented folklore gained purchase as a part of the processes of our countries’ national enlightenment. We did not pay much attention to its original form, although its authenticity was precisely what we appealed to and valued most, perhaps also because we felt we had lost it long ago and that if something is to be alive, it must undergo constant change, wear, death and rebirth. So folklore turned into ‘fakelore’.

Wariot Ideal venture into this odd landscape of folklore and ritual in order to bring a theatrical report on its state. It can be taken to claim that present‑day rituals are ahistorical, torn from their origins, a curious amalgam of different sources, they have nothing to do with the faith, national idea or metaphysics that gave birth to them, their essence is long inaccessible to us, we are unable to expose ourselves to them and experience them as they should be. Despite all this, we are still intrigued by them, seek them out and create new ones in their image. In The Depths, artist Jan Dörner, musician Jan Kalivoda and mime Vojtěch Švejda concoct a distinctive brew from the original ingredients or authentic folk theatre. Costumes and set, but also musical instruments, all were built from found materials – natural or artificial. The same process is behind the individual scenes – even the introductory sequence of a footbridge crossing, but also the character of a samurai dressed in a rubber car mat costume played by Jan Dörner or the mimic samurai of Vojtěch Švejda – suggest an inspiration by Japanese nō, while the full‑face mask, here made of bread, allude to local ritual theatre. However, all of the inspirations have been craftily adapted with the help of objects that were readily at hand, giving them a very peculiar character. Handmade props and instruments have the auratic quality of original objects, they reflect a living, ‘pocket’ metaphysics as well as man’s quixotic effort to grasp the universe as a whole. And of course, playfulness and fantasy as the basic elements of theatre. Three men on stage like three boys on an expedition to Zeman’s beginning of time, or three children running around the dark alleyways of Folgar’s Shades, or like the three bugs in a box from Roháč’s film of the same name, they prove that play and ritual are indeed very close to each. At times when we are incapable talking to the universe through ritual, a turn to play – amicable, spontaneous, collective, uninstrumentalised – can be a reasonable way to collective trance, to an experience, at last, of something common that is not built on conflict or empathy.

Wariot Ideal is an artist collective established in 2009 as the outcome of the years‑long collaboration of Vojtěch Švejda, Jan Kalivoda and Jan Dörner. Its members are active in various fields of art – theatre, film, sound, music and lighting design. They seek new possibilities of artistic expression and produce original comedic works reflecting on current events. 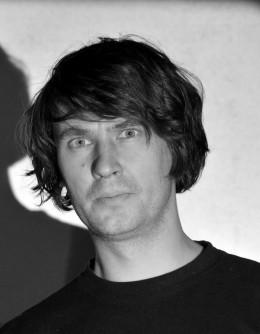 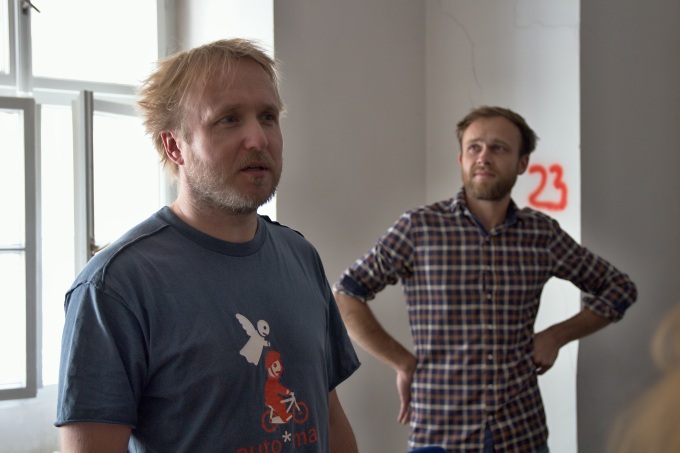 Vojtěch Švejda (1976) is an actor and mime specializing in original drama and improvisation. He graduated in nonverbal and comedic theatre from the Music Faculty of the Academy of Performing Arts in Prague; while still a student, he was an actor and mime at the theatre Alfred ve dvoře (Alfred in the Courtyard) and at the National Theatre in Prague. In 2009, he was nominated for the Alfréd Radok Prize as Discovery of 2008 for his play Arctic Robinson or the Incredible Adventures of Jan Eskymo Welzl. In 2012, he received the Czech Theatre DNA Award for creative integrity and for raising the profile of Czech authorial theatre abroad.

Jan Kalivoda (1981) is a sonic wizard and composer. He studied film music at the Film College in Písek and traditional Indonesian music on Bali. He is currently completing a course at the Centre of Audiovisual Studies of the Film Faculty of the Academy of Performing Arts in Prague. He authored musical scores to many theatre productions and is a member of the independent group Undo and Redo. Together with Vojtěch Švejda, he is a member of the nojazz music gang Woříšci as well as the anecdotal punk duo Exclusive Mars.

Jan Dörner (1975) is a lighting designer, scenic designer and creator who has worked on many physical, dance and dramatic productions. Besides Wariot Ideal, he is also a member of the collective HANDA GOTE. In his work, he combines antiquated machinery with modern technology, seeks unusual approaches to lighting design and recasts scrap, metal waste and electrical leftovers into unique lighting systems.

Wariot Ideal have appeared in the off‑program of Divadelná Nitra 2013 with their performance The Undertakers.