The story of Anna Karenina is known by every enthusiastic as well as less experienced reader. It is a part of the fundamental codex of education to participate in the debate concerning the guilt or innocence of the main heroine of this difficult, almost philosophical work, which maps a certain critical period (but not the most critical one) in the Russian history. It even exceeds it, it goes beyond it and by this, it becomes applicable in every period. Though the production at the Slovak National Theatre does not begin with the famous, almost high-flown sentence by L. N. Tolstoy about happy and unhappy families, its significance floats above the heads of main heroes all the time, defining their acts.

For today’s audience and readers, the story may become only a banal plot full of open passion and hidden hatred, but it may also raise new social and political issues. This second direction was chosen by Roman Polák and Daniel Majling in their dramatization of this work. Anna Karenina is one of the main characters but not the central one, surrounded by opinions. At the same time, we watch more story-lines which transfer us in space and time and which are developed within extraordinary social and political events. The dramatization of the novel is not fashionably extravagant but it is not strictly traditional either. This is what creates its courageousness and explosiveness, and it is also a challenge for the actors.

Great social themes of Russia (dominance and power of the major nation) are complemented with several family issues (conservativeness of the family and gender inequality) as well as delicate intimate themes (the right for love and own standard of living). Polák puts them next to each other without preferring or depreciating any of them. By this he creates an interesting spectre of twenty-five scenes of whispers and cries which terminates in a post-dramatically commented monologue of a suicide in which Anna Karenina watches herself, her life and her fatal move. In mere sound of a train bell we see flashes of her life and we know that the fulfilled destiny is the only thing which defines us. The issues of guilt and innocence, morals and sin are in such a moment moved to the second place of importance.

Polák puts all the themes and characters “on ice” where they slip and fell down in order to get up to their feet again. The stage design thoroughly fulfils director’s objective, it creates a sort of a big ice-ring of the world where human lives are flashing, seen as if from a speeding train until the observer is feeling dizzy. Interesting acting, a perfect team-work of the actors and, most importantly, the systematic work of the director, who carried on in his previous “great canvases” creation, make the production an extraordinary stage work which will be difficult to overcome in the coming seasons. 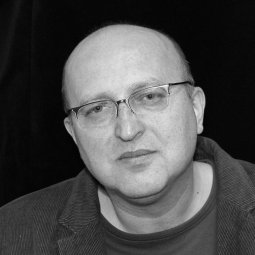 Roman Polák (1957) studied directing at the Academy of Performing Arts in Bratislava. During his career he has worked for the most important ensembles in Slovakia and the Czech Republic and has created more than 100 theatre productions. In 1990 – 2000 he worked for the Astorka Korzo ´90 Theatre, where he later became Artistic Director. He performed the same function at the Košice State Theatre and Drama Department of the Slovak National Theatre. He also worked for theatres in Tallin, Chicago and Paris.

His productions The Dispute by French playwright Pierre de Marivaux (1988) and Brecht’s Baal (1989) gained high praise at international festivals in Torun, Wroclaw, Moscow, Belgrade as well as at the Edinburgh Festival. The Dispute was listed also in the Guardian Critic’s Choice. Roman Polák is considered a director with quite a specific and distinctive approach to the staging work. His most important productions are: Chekhov – Uncle Vanya (1995), Ibsen – Peer Gynt (2000), Play Gorky – adaptation of Summer Guest (2004), Chekhov – Ivanov (DOSKY Award in Best Direction and Production of the Season 2005/2006 categories).